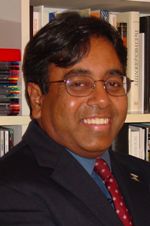 Edward Ramsamy, Ph.D. is Associate Professor of Africana Studies and member of the graduate faculty of Geography, and the graduate faculty of Urban Planning and Policy Development at the Bloustein School. He is the author of the book The World Bank and Urban Development: From Projects to Policy (Routledge, 2006). In addition to his research in international development planning and geographies of globalization, Dr. Ramsamy’s fields of study include the political economy of transition and nation-building in post-colonial/developing societies, as well as the comparative politics of identity and race relations in South Africa and the United States. He has edited Science, Culture and the Politics of Knowledge: Contexts and Conversations (forthcoming, Cambridge Scholars Press), and The Black Experience in America (with Gayle T. Tate, 2006, Kendall Hunt). He has published numerous articles on regional integration in southern Africa, as well as racial, ethnic, and national identity in post-apartheid South Africa. Dr. Ramsamy is Secretary and a Founding Trustee of the Global Literary Project, Inc. He is also the recipient of numerous honors and awards, including fellowships from the Social Science Research Council, the Center for the Critical Analysis of Contemporary Culture, and the Institute for Research on Women.
Cultural Sociology of the Middle East, Asia, and Africa