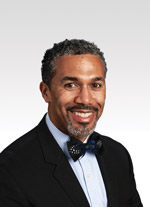 Dwight Carter is a nationally recognized school leader from Central OH. Because of his collaborative and innovative leadership, in 2010, he was inducted into the Jostens Renaissance Educator Hall of Fame. He was also named a 2013 National Association of Secondary School Principals Digital Principal of the Year, the 2014 Academy of Arts and Science Education High School Principal of the Year, and the 2015 Ohio Alliance of Black School Educators Principal of the Year. He has served as principal at Gahanna Lincoln High School, New Albany High School and has been a leadership coach and consultant. Mr. Carter has frequently been a guest speaker in schools, universities, and at local, state, and national conferences that deal with Generations Z and Alpha, technology integration, staff development, school culture, and other 21st Century education topics. He has authored numerous blogs and has written on behalf of NASSP. He has also been a high school social studies teacher, a high school assistant principal, and a middle school principal during his twenty-seven career. He is currently an Assistant Director at Eastland Career Center in Groveport, OH.

Leading Schools in Disruptive Times
What's in Your Space?