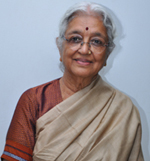 Devaki Jain, Honorary Fellow St Anne’s College, Oxford University, is Founder and former Director of the Institute of Social Studies Trust, New Delhi, India. She was previously a lecturer at the University of Delhi, a founding member of Development Alternatives with Women for a New Era (DAWN), member of the South Commission (chaired by Julius Nyerere), and of the UN eminent persons group concerned with child soldiers. She has an honorary doctorate from the University of Westville in Durban, Republic of South Africa, and has held fellowships at Harvard and Sussex Universities. She has been a member of State Planning boards and many of the Government of India’s special committees related to gender and its inclusion.