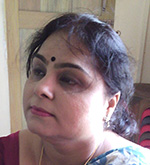 Chandrava Charkravarty is Professor, Department of English, West Bengal State University; her interests are the complex connections between gender construction, identity and nation-building in various forms of canonical and non-canonical texts. Among her recent books is Gendering the Nation: Identity Politics and the English Stage of the Long Eighteenth Century (2013). Recent articles are ‘The “King” in Rabindranath Tagore’s Drama’, in the Politics and Reception of Rabindranath Tagore’s Drama, A. Bhattacharya and M. Renganathan, eds (2015); ‘Connecting Hemispheres, Playing with Distance: Rammohan Roy, an Indian Transnationalist’, in The Idea of Experience of Distance in the International Enlightenment, Kevin Cope, ed. (forthcoming).
Tagore's Ideas of the New Woman