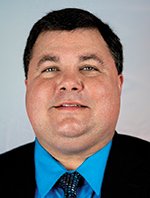 
B. R. Jones is a professional development consultant working on effective school improvement with schools from kindergarten to university all over the United States. B.R. started his career as a teacher and athletic coach, but over the course of twenty years in education, he has worn the hat of club sponsor, bus driver, maintenance director, and for the past several years, building-level principal.

Most of B.R.'s experience has been in schools with high minority populations and low socio-economic conditions. When B.R. took over as the supervising principal of his current school, Wayne County High School (WCHS) in Waynesboro, Mississippi, the school faced many difficult issues. One of the most concerning was that WCHS was considered by many to be unsafe and a lost cause.

By implementing many of the solutions described in this book, B.R. was able to lead WCHS to new heights in student achievement. The result has been graduates who are better prepared for college and careers and a revamped perception by the community concerning the safety of the school.

Because of these improvements in instruction and serving at-risk kids and increased student achievement, US News and World Report chose WCHS as one of America's Best High Schools in 2010. In addition, B.R. was selected as the administrator of the year for the State of Mississippi in 2010, as well as the Mississippi Educational Computing Association (MECA) administrator of the year for 2010 for the advancements in technology that he helped implement for at-risk students.

B.R. enjoys spending time with his family and  friends. He has three children and a lovely wife whom he adores.