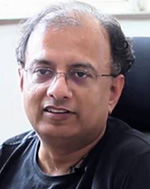 Amber Habib is currently a Professor, Department of Mathematics, School of Natural Sciences, at Shiv Nadar University (SNU), Uttar Pradesh. Professor Habib did his MS (Integrated) in Mathematics at IIT Kanpur and PhD at University of California, Berkeley. These were followed by postdoctoral positions at the Harish-Chandra Research Institute, Allahabad, and the Indian Statistical Institute, Bangalore Centre. His research interests include representation theory and mathematical finance.

For over 15 years, he has been involved in efforts to make mathematics education at the school and college levels more interesting and fulfilling through special topics, projects and an appreciation of the myriad links of mathematics with other disciplines. This began during his time as a teacher at St. Stephen’s College, University of Delhi, and was his main focus during the years he spent with the Mathematical Sciences Foundation. He has also served several times as a resident faculty for the Mathematical Training and Talent Search Programme sponsored by the National Board for Higher Mathematics.

He has received the SNU Faculty Excellence Award for Excellence in Teaching during 2011-2014. Apart from his academic interests and responsibilities, he finds fascination and recreation in nature photography. One can find a rich repository of the same in https://www.flickr. com/photos/amberhabib/.
A Bridge to Mathematics