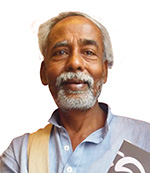 Adhir Biswas has lived in Kolkata since 1967. He began to write in 1976, aged twenty-two, contributing fiction and nonfiction to little magazines. He ran a bookshop for many years. He is the well-known editor of Gangchil and Doel. The first volume of his memoir won the Suprabha Majumdar Memorial Prize by the Bangla Academy of the Government of West Bengal in 2014. He was awarded the Vidyasagar Memorial Prize for children’s literature by the West Bengal government in 2017.
Memories of Arrival