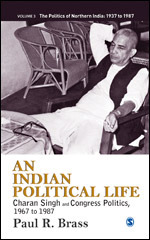 Charan Singh and Congress Politics, 1967 to 1987, the third and final volume in the trilogy of The Politics of Northern India, begins with the dramatic political event of the fall of the Congress in the most critical state of UP and the formation of the first non-Congress government. This event was of the utmost concern to Indira Gandhi, for she could not rule the country without a firm political base in the most populous state of the country. Insofar as Charan Singh was concerned, it marked the beginning of his rise to power in the state and the beginning also of the dramatic and complicated struggle between him and Indira Gandhi.

The current volume, like the previous volumes, is based upon the author’s access to all the critical documents in Charan Singh’s political life, an access that was provided to him by Charan Singh personally, and which he has used specifically for this work on his political life.

Preface and Series Note
Chronology of Principal Events in the Life of Charan Singh
I: LAST DAYS IN LUCKNOW, 1967-1975
The fall of the Congress and Formation of the first Non-Congress Government
Alignments and Realignments
Misalliances: Charan Singh and Indira Gandhi
“Nationalization” of the UP Sugar Industry
Indira Gandhi, Kamalapati Tripathi, Charan Singh and “New Congress” Politics
Land Ceilings
Hiatus
II: EMERGENCY AND ITS TERMINATION
Declaration of the Emergency and Its Justification
The Gradual Restoration of Normality and Termination of the Emergency
The Fall and Rise of Indira Gandhi
Arrest And Release Drama
III: AMBITIONS FULFILLED AND THWARTED, 1979- 87
Split Between Morarji Desai And Charan Singh
Defeat, Outrage, and Division
Charan Singh’s Legacy
APPENDIX A: Interview with Chaudhuri Charan Singh at the Suraj Khand Inspection House, Outside of Delhi, March 24, 1978 (Recall From Memory)
APPENDIX B: Remarks of Narain Dutt Tiwari, Minister Of Finance, UP, Concerning Charan Singh. Part of a taped interview in his home, Lucknow, July 22 1973
Appendix C: Paul R. Brass Transcribed Interview with Indira Gandhi, 26 March 1978
Bibliography
Index

Paul R Brass is Professor (Emeritus) of Political Science and International Studies at the University of Washington, Seattle. He has published numerous books and articles on comparative and South Asian politics, ethnic politics, and collective violence. His work has been based on extensive field research in India during numerous visits since 1961. He has been a University of Washington faculty member and Professor, Department of Political Science, and The Henry M. Jackson School of International Studies since 1965. He received his BA in 1958, Government, Harvard College; his MA in 1959, Political Science, University of... More About Author